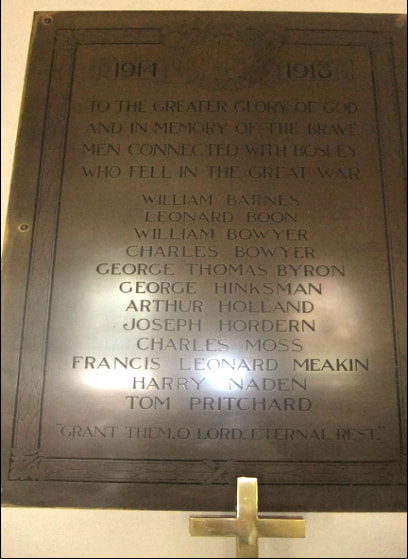 Charles attested 11/12/1915 at Macclesfield; his occupation at that time was domestic gardener, he was a lodger with Mr Richard Silverwood, at Styal, Handforth, Cheshire, in 1911.  His army medical record shows him to have been five feet six inches tall weighed 143lbs with a chest measurement of thirty eight inches. After completing his training Charles was drafted with the British Expeditionary to France, 19/07/1916, where he joined the 1st Battalion Cheshire’s at Rouen. On the 27 July 1916, he was posted to the 13th Battalion, which was raised on 1 September 1914 at Port Sunlight. As part of the 25th Division, it left Aldershot for France on September the 25th, 1915. The 13th Battalion were involved with the preparations for the offensive at the battle of PILCKEM, 31 July to 2 August. The 74th Brigade was held ready for any work that might be required by the Chief Engineer. Charles was reported missing presumed killed in action, Sunday, 30/07/1916, aged 23 years. He died two months after his brother William died in Iraq.

Private, Charles Bowyer has no known resting place and he is commemorated on the Thiepval Memorial, Somme, France.
C.W.G.C. Ref: - Pier and Face 5A and 5B.
WILLIAM BOWYER.
18430, Private, William Bowyer, 8th Battalion, Cheshire Regiment.

William enlisted at Macclesfield, and was drafted to the Balkans Theatre of War 16/10/1915, the 8th Battalion reached Mesopotamia with the 13th Division on the 28th of February, 1916. They had already taken part in the evacuation at Suvla and Helles. They arrived at the time when hope of relieving the garrison besieged in Kut was almost gone. On the 17th and 18th April, the Battalion was in action at Bait Isa. They relieved forward Battalions of the 3rd Division early on the 18th April and were continuously engaged in strenuous trench warfare till the 19 May. On the 19 May, the Turks evacuated the Es Sinn position, but held on to the trenches covering Kut in the Hai bridge-head, on the south, and in Khadairi Bend, on the north. Further military operations were prevented by the heat. The troops were worn out with disease, dysentery, cholera and boils. William died, in the 8th British Field Ambulance, of Cholera, Tuesday, 09/05/1916, aged 30 years.

Born in 1894 at Talk-o-the -Hill, Audley, Staffs, son of coalminer, Thomas and Hannah, (nee, Berrisford), Byron. The family lived at Rushton Spencer. 1901 census shows there to be three children, Charles, Ellen and George Thomas. C.W.G.C. gives his mother as being, Bethia Trueman, of Ditchway Farm, Rushton, Staffordshire. In 1911, George was working at Ravensclough, Rushton Spencer, for farmer, John Vernon.

George enlisted at Stafford, on completion of his training he was drafted with the Egyptian Expeditionary Force to Egypt. His records show he died, Wednesday, 23/10/1918, he was aged 23 years, at Beirut .

Lance Corporal, George Hinksman has no known resting place and he is commemorated on the Ploegsteert Memorial, Hainaut, Belgium. C.W.G.C. Ref: - Addenda Panel.
ARTHUR HOLLAND.
Unable to identify or trace any military or civilian records. 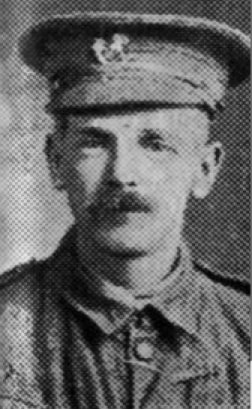 Born in 1878 at Macclesfield, son of James and Hannah, (nee, Goodfellow), Hordern, of, Bosley Works, Bosley. Joseph’s siblings were Edith, Harriet and Mary Annie. Joseph attested at Macclesfield, 15/06/1898, as an eighteen year old man, to join on a 4 year service term. His army  medical record shows he was five feet nine inches tall weighed 132lbs with a 33 inch chest measurement. He first reported to Shrewsbury, and after training, was despatched to South Africa, serving in the troubles there, from 1899 to 1902. He was awarded the Queen’s South Africa Medal with Clasps for Paardeberg, Dreifontein, Johannesberg and Cape Colony; this was followed with the King’s South Africa Medal with Clasps for South Africa 1901 and South Africa 1902. On returning to England he completed further years with the K.S.L.I. to a total of 16 years.

He then returned for a spell of work at the Bosley Flour Mill, this was followed by employment by his brother-in-law, plasterer, Mr J. Mellor. He had married Catherine Hutchinson on 26 June 1906, at Macclesfield; they had two children, Nellie and James. Joseph’s reserve period had expired by six weeks, but he immediately re-joined his old regiment at the outbreak of war, and he entered France with the British Expeditionary Force 08/04/1915. He was awarded the Military Medal for Bravery in the Field, a citation which reads:  “Your Commanding Officer and Brigade Commander said that you distinguished yourself on 21st and 22nd April 1916 near Ypres by gallant conduct, twice going back across the open, under heavy fire and through deep mud to bring support”. 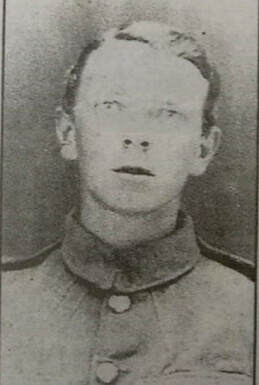 Born in 1892 at Biddulph, son of gas engine driver, James Arthur and Jane, (nee, Boon), Meakin, who later moved to Cloudside, Congleton. Francis had two brothers George Albert and James Arthur. In 1911 he was employed as a ‘postman’, however when he enlisted his occupation was grocer manager.

Francis enlisted, 02/03/1916, at Leek, Staffs, his army medical records show him to have been a man of five feet four inches tall weighed 99lbs with a chest measurement of thirty two and half inches, he had blue eyes and brown hair, his religion given as Wesleyan. He started off at the North Staffordshire Depot with a number of 36931, but was soon transferred to the Lincolnshire’s. After his training he was drafted with the British Expeditionary Force to France, 14/05/1917, embarking from Folkestone and landing at Boulogne. Francis was serving with the Labour Corp when he was killed in action, Friday, 31/08/1917, he was aged 24 years. 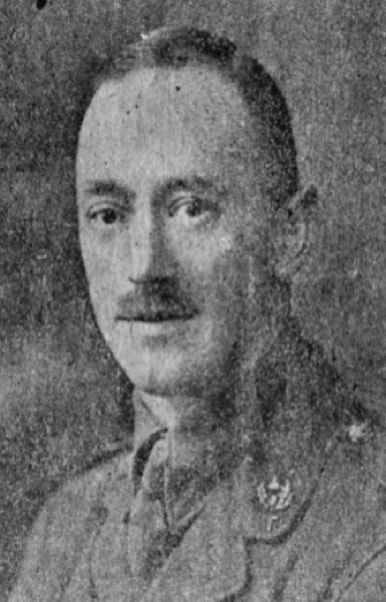 Born in 1883 at Eccles, in Lancashire, son of Charles Moss. In 1891, he was living with his father on Prestbury Road, Macclesfield, working as a Traveller. He was a Director with the silk firm Messrs Joseph Dunkerley and Son Ltd, Oxford Road, Macclesfield.

On the declaration of war Charles joined the Lancashire Yeomanry as a Private; however he was soon selected for officer training. He joined the 7th Battalion Cheshire Regiment at Oswestry, and then moving onto Bedford, before they were drafted with the Mediterranean Expeditionary Force to the Dardanelles, landing at Suvla Bay, 08/08/1915. In Gallipoli he suffered a serious gunshot wound to his right thigh and he was evacuated back to England aboard S.S. “Aquitania” for hospital treatment. Once he had recovered from his wound he spent some time at Oswestry, then he resumed active service abroad. Charles re-joined his regiment in Egypt. He was awarded the Military Cross for Bravery in the Field at Gaza 26/03/1917, his citation reads; ‘he led his company with exceptional gallantry to its objective, which he reached in an hour, although continuously under fire, over a distance of 5000 yards. He continued to lead his company against the enemy support trenches, inflicting many casualties’.

Charles was part of a mounted detachment which was engaged in an attack on a hill known as Khuweilfeh, some 11 miles from Beersheba.
The main assault was carried out by the 53rd Division. Charles was killed in action, Tuesday, 06/11/1917, he was aged 34 years.

Born in 1892 at Bosley, son of farmer, Abraham and Sarah, (nee, Billinge), Naden, of Lower Golding, Dawson Farm, Bosley.  This was a family of nine children,  Frederick William, Sarah Minnie,  Thomas Percy, , Mary Louisa, Francis Herbert, Annette Emily, Abraham Henry and Elizabeth. In the 1911 census he is shown as Henry Naden, working as a waggoner on Land Back Farm, Henbury, Macclesfield, for a Mr Henry Brown.

Henry enlisted at Manchester, and after completing his training was drafted with the British Expeditionary Force to France. He was killed in action on the Monday, 23 April 1917; he was 25 years of age.

Medals: British War Medal and Victory Medal.
Probate to his Will was with John Robert Burdin, wheelwright, and Henry Shuker, farmer.
Effects: £152.16s. 8d. In his Will, Henry left £5 to the Macclesfield Infirmary. 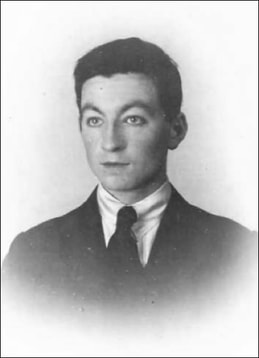 Born in 1895 at Bosley, son of miller, Henry and Annie Heap, (nee, Osbourne), Pritchard, at Lower Works, Bosley. Tom  had an elder sister, Agnes. In the 1911 census, Tom is shown to be working as a ‘checker in’ at the corn mill; however his  occupation when he attested was as a service roller man at
the corn mill.

Tom attested, 09/12/1915, at Macclesfield, and was initially placed with the Royal Field Artillery, training at Preston and Rugeley, before being transferred on 07/01/1917 to the York and Lancaster Regiment. He was five feet nine inches tall weighed 128lbs and he had a thirty five inch chest measurement. He embarked from Folkestone, 07/01/1917, arriving the same day at Calais. His theatre of war was France; he died of gunshot wounds to the buttocks, in the General Hospital at Rouen, Saturday, 28/07/1917, aged 22 years.

Behind every headstone in a grave yard are many stories, most are forgotten and beyond recall. There is a headstone in Bosley Church yard, it is near to the path as you walk from the Church to the gate. " Asleep in Jesus  M H Brassington  Wesleyan Minister Queensland  died 10th March 1894 in his 26th year".    I have often wondered what his story was?  None of the local Methodist families, who go back several generations seemed to know anything about him. I presumed he was a bachelor with a local connection who had died in his prime.
A few weeks ago we had a surprise email from his great grandson Mark who was researching his ancestors. M H Brassington certainly had a story! This is an abridged version of the story that Mark has sent.